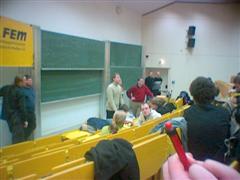 “The Amiga computer was a machine ahead of its time. When it was released in 1985, its color screen (4096 colors in HAM mode!), four-channel sampled stereo sound, preemptive multitasking GUI, and custom chips to accelerate both sound and graphics made the year-old Macintosh seem antiquated and the PC positively Paleolithic. Steve Jobs was reported to be extremely worried about the Amiga, but fortunately for him and Apple, Commodore had absolutely no idea what they were doing.“