I’ve searched quite a time for this solution. So take it with the same pleasure as I did. (it’s an order!). The best about this solution is that you don’t only get the compiled binary. You get some sort of short tutorial and the source. It’s far more than a crash course to Terminal Services. It extends the field of applications of the Terminal Services and on top you get knowledge for free. 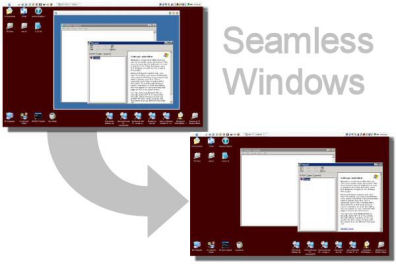 Commercial products have been written to achieve this in a Windows environment, the most well known would be Citrix. Citrix uses its own protocol (ICA) to publish applications to the client. Others have used Microsoft’s protocol called RDP (Remote Desktop Protocol) with additional software to achieve the same effect (the most notable of these is Tarentalla’s Canaveral IQ – I suspect they use a similar, but more sophisticated, method to the one presented in this article).

While these products provide a lot more than just seamless windows, they are also quite expensive. It would be nice to have this feature in a regular RDP client without having to buy a whole application publishing product.

This article provides a possible solution to this problem by extending Microsoft’s RDP client using virtual channels to communicate between the server and the client. This option has been chosen over writing or extending an existing open source RDP client (such as rdesktop) because we will still be able to take advantage of all the features in Microsoft’s client (and presumably all new features they add in the future). Also, an advantage to using Microsoft’s client is that we can get some rudimentary application publishing over a web page since their terminal services client has an ActiveX component to do this.”