I wrote on several occasions that Microsoft Resarch rocks. And it’s time to write it again. I just found out that the guys from MSR are implementing a research operating system in C#. It’s called Singularity.

“Singularity is a research project focused on the construction of dependable systems through innovation in the areas of systems, languages, and tools. We are building a research operating system prototype (called Singularity), extending programming languages, and developing new techniques and tools for specifying and verifying program behavior.” 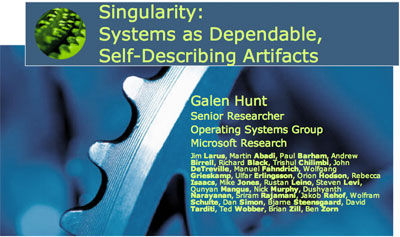