The second session with Mark Russinovich that I attended this TechEd was the “Understanding and Fighting Malware”-Session. Actually it was an overviewing Session and nothing too deep into it. But interesting enough there were some technologies demonstrated that I personally have never seen live. I knew that they are there and what they are supposed to do but I never used them actively as a developer. One of this technologies is NX or DEP. 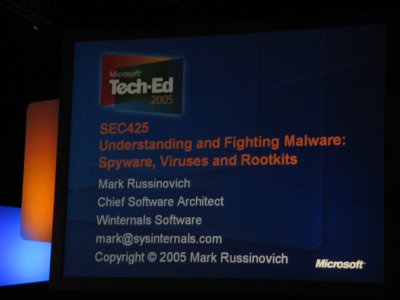 “Today’s internet is fraught with peril in the form of undesirable and malicious software. These types of software continue to evolve new ways of propogating and ways of embedding themselves more deeply into the systems they infect. In this session you’ll gain an understanding of their propagation methods, including buffer overflow exploits, how to detect them and how to prevent them. You’ll also get a first-hand look at rootkits, which are the sophisticated tools and techniques by which malware attempts to avoid and prevent detection. “