Marketing campaigns are a great idea if you want to advertise a product. And if you’re going to do such a campaign you MUST do it right…otherwise you’re proper fucked.

As a proud XBOX 360 owner and racing simulation fan I tried to take part in such a marketing campaign. The campaign is called “PGR100” and is divided into 4 stages. I missed the first one and wanted to take part at the second stage BUT…there was no time/date scheduled when it’s going to take place… and I really don’t have the time to check twice daily if something new is up online – that anyways should not be necessary as I am subscribed to the newsletter…..BUT… well… Stage 2 took place on the 3rd of March…today it’s the 4th… and..guess what eMail I just got?… Yeah, you’re right!

CRAP! You bastards…oh wait…Stage 2 was “Are you the best PGR3 online commentator?”…which is just the lames thing possible to think of when it comes to racing simulations… 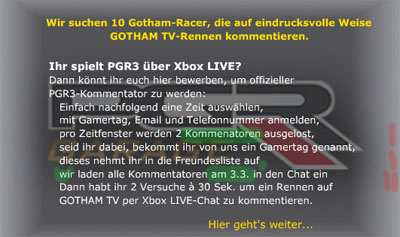 But as if the date faux-pas wasn’t enough they managed to get 4 typos into the small text from above…the intern did that right?

But back to the great campaign…that’s what the current campaign homepage looks like: 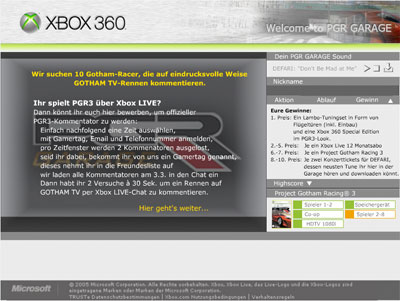 Let’s zoom in on the prices you can actually win: