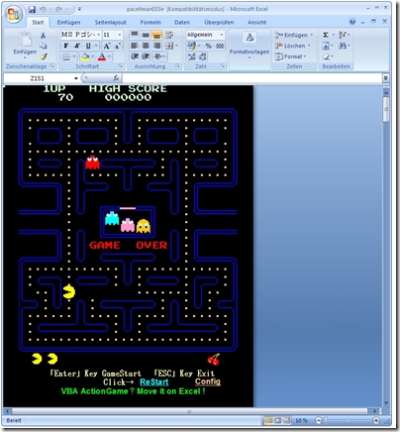 “This software works on Excel 97 and 2000. I was absorbed in video game named *pacman* when I was a schoolchild. I would like to reproduce that on Excel. I’ve held the thought from two years before,
and finally…It’s realized.

All actions are expressed by rewriting of a cell background color. Each one of cells as a dot, and move it by make cell’s background color high-speed rewriting. Although I did not think it’s possiblele, but now it’s possiblele by the favor of the improvement in a performance of a personal computer. The window zoom is 10%, so the each cell can not be seen. But it is A CELL.”

One thought on “Play PACMAN with Excel…”