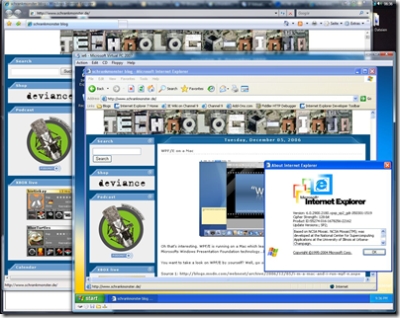 “Many of you have asked how to run IE6 and IE7 in a side by side environment. As Chris Wilson blogged about early this year, it’s unfortunately not so easy to do. There are workarounds, but they are unsupported and don’t necessarily work the same way as IE6 or IE7 would work when installed properly. As Chris said, the best way to use multiple versions of IE on one machine is via virtualization. Microsoft has recently made Virtual PC 2004 a free download; we’ve taken advantage of that by releasing a VPC virtual machine image containing a pre-activated Windows XP SP2, IE6 and the IE7 Readiness Toolkit to help facilitate your testing and development. The image is time bombed and will no longer function after April 1, 2007. We hope to continue to provide these images in the future as a service to web developers.”