The planning process started way earlier than last year but as usual some things remain until the very last minute before everything starts. But since this year the teamwork and enthusiasm was extraordinary we finally made it almost as planned. We surely did not reach our goal of releasing the recordings hours after the talk ended. Mainly because we underestimated the amount of knowledge and pain it took to actually get the recordings running on the iPod. It was one of the guidelines for this years official recordings: they had to run on current generation video iPods and they had to have all the metatags. So the team did it and we ended up releasing the first half (nearly) of the 23c3 recordings into the public only 2 weeks instead of the 4-6 months of last year. Even better: we managed to improve the video quality and even got smaller files. That wouldn’t been possible without the encoding-pipeline knowledge that Michael Feiri brought into the team. With that knowledge it also took several days to actually build the working pipeline.(yes the iPod is one special piece of hardware) The complete encoding-pipeline we used will be documented and released soon.

So after all that planning we finally packed our stuff and hit the road: 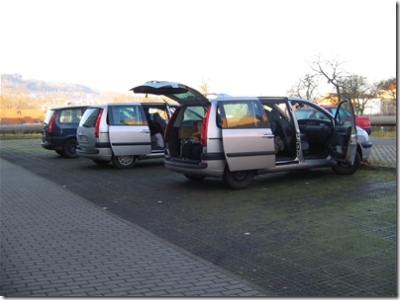 After some hours and the unpacking the video studio looked like this: 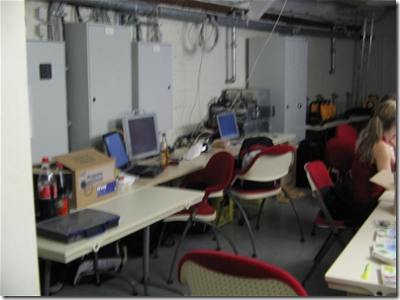 here’s a close up of the Windows Media Encoders, the h.264 encoding machine and the storage (all from behind): 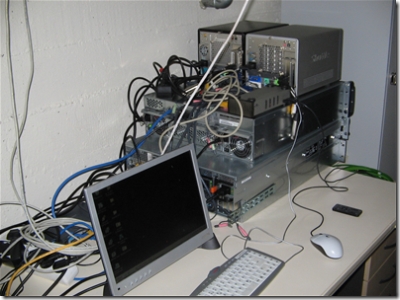 So we surely brought enough processing power to berlin. And this is what did take the picture: 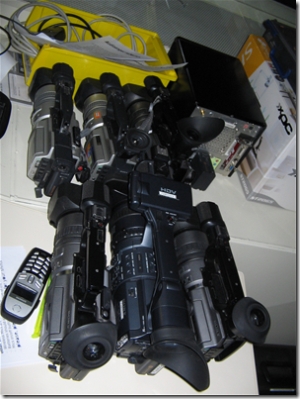 BTW: the black machine in the background just
died during the keynote speech…

Want to see what it’s like watching “out of the window” of the video studio? No problem: 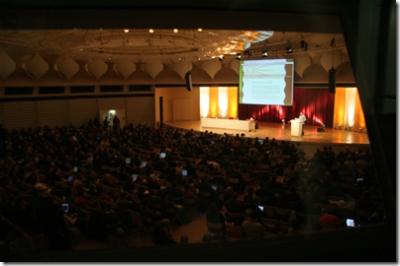 or how about another view of the studio: 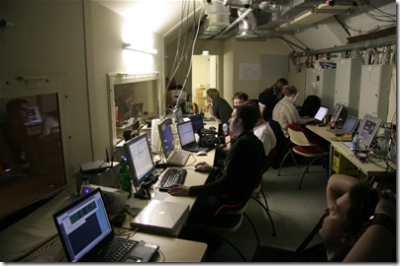 So. So you had some pictures of the video studio and the setup. But I bet you want to know some more details about the setup itself. I created an overview for you: 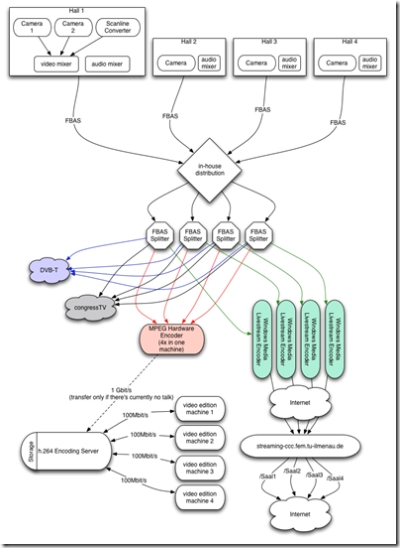 Since last years setup was completely digital (planned) and we ended up using the DV-tape backup since all the recordings were screwed up we thought it might be a good idea to go back one step and use analog video as in FBAS to transport and record the talks. We also had the DV-tape backup this year and to be honest in some cases we have to fall back to that. Less than 10 out of 130 recordings are screwed up so we have to use the DV backup. That means 120 of them worked out as planned. Great! We are currently cutting and encoding them and as you read this more than half of them should be up on the official servers and the mirrors.

Now in the aftermath of the congress we learned a new lesson: there’s maybe one or another speaker that would not allow us releasing their talk recording. In the future we think of having something like a “don’t record me”-list to avoid misunderstandings.

2 thoughts on “about the 23c3 recording and streaming teamwork”