I had this very same idea just a week ago and now someone has done it: A Raytracer written entirely in C# and running upon XNA.

“Ok, I’ve got most of what I want done on the Ray Tracing project — enough at least to publish some code and do some blogging. This first article describes the overall coding structure, and how to use the project. I’ll get into some of the more difficult aspects of ray tracing in future posts.” 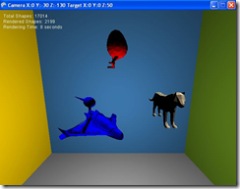 It obviously doesn’t run on the 360 yet – so keep on watching this project. (due to some limitations on the 360 XNA Implementation I would also recommend waiting for the next run)