Hmm… Once upon a time there was a guy with an idea. The idea simply breaks down to this:

“Sell full price games to people and get an extra revenue out of in-game advertising.” 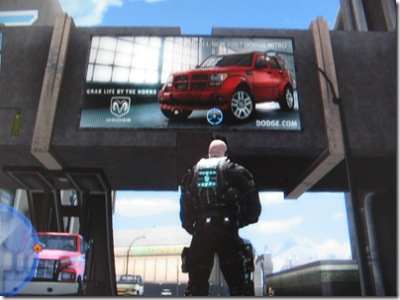 So here we are: I just found pacific city in crackdown literally plastered with Dodge advertising. Once day it was Dell… if you’re playing in the UK you’ll probably get army ads… how sick is that.

The first game that got this kind of in-game advertising was Testdrive Unlimited. The advertising was only available in the US of A and when you bought the game there it wasn’t full-price but $20 less than a full price title – because of that in-game ads. As an european player you didn’t see any ads and you had to pay the full price.

In the case of crackdown there’s no lower price. And that sucks.

3 thoughts on “in game advertising”