FeM is in need of a decent conferencing system for years now. And it seems that there’s something really cool showing up in the next days. As of now Microsoft is going to put it’s Roundtable on sale. 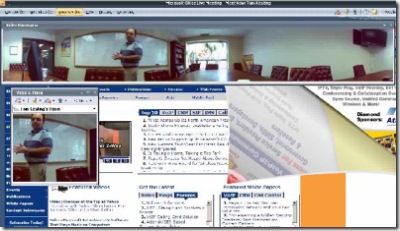 “The RoundTable actually installs two USB camera devices. The first is the Active Speaker which uses the RoundTable’s 6 microphones to locate where in the room the active speaker is and then focus one of the 5 cameras onto that person. I suspect it may actually use 2 cameras to focus on a person, since it always appears that the speaker is “centered” which probably would require at least 2 camera images and then the images are “spliced” together, processed, and then transmitted over the USB cable. The second USB camera device is the panoramic camera which combines the 5 camera images into a single panoramic image.”