Once again FeM is recording and live streaming a Chaos Computer Club event. The Chaos Communication Camp starts today and you can watch everything live:

“The Chaos Communication Camp is an international, five-day open-air event for hackers and associated life-forms. The Camp features two conference tracks with interesting lectures, a workshop-track and over 30 villages providing workshops and gettogethers covering a specific topic.”

“You can participate! Bring your tent and join our villages. The Camp has everything you need: power, internet, food and fun. The 100.000 square meter areal features enough space to camp, cozy places to hang out and a nice pool and lake to swim and do nautic experiments.” 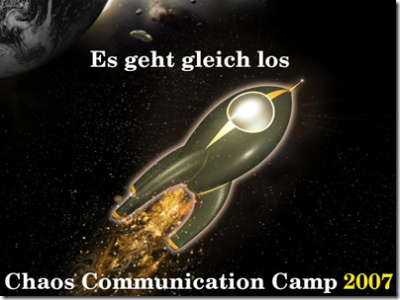 There are two lecture halls called “foo” and “bar”:

Of course like at every CCC event you can grab an up-to-date schedule called “Fahrplan” here. The only thing I did not mention yet is the FeM-Village Wiki page…oh well..done :-)