One of the most spectacular and grossing movies of ’07 and finally I have seen it, too. Last spring people invaded the cinemas like the Persians Greece, spent some money and went home again. 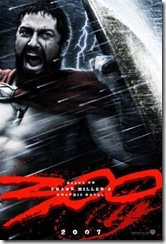 The story of the 300 mighty Spartans, who defended a narrow pass against the superior numbers of Persians until death should be familiar to everyone around. Also uncontroversial are the well-made CGI-backgrounds as well as the entertaining ability of the whole thing.

Is it pro-Bush and assists on his war in Iraq or (possibly) against Iran?

A clear no, because too far-fetched. There are no politics in it. The big box office is also no indication of a widely hidden pro-war predisposition among American viewers. I guess, it’s rather the recent popularity of Frank Miller and his comics.

That is a typical European critic, but the martial quotes and looks are fortunately paired with just as much irony. Lastly, the Spartans lived this way despite some SS-like “blood and honor” jabbering.

Is it really better being a “free” Spartan than a “slaved” Persian?

My impression was the Persian acted much more like the so-called decadent occident. Lots of tolerant and hedonic people, who didn’t get discriminated because of their religion, looks and behaviors, or? Xerxes didn’t deny the wishes of Ephialtes, e.g. The Spartans by contrast with their euthanasia and their strict living kept unfamiliar to me all the time.

This is of cause pure fiction. How can someone supply such an amount of soldiers even only one day? The whole Persian food production would had to accompany them.

Are the Arcadians cleverer than the Spartans by withdrawing from the lost battle?

I would say yes, and there you see why a civilian might be a lesser tough warrior but superior when it comes to thinking.

Let’s hope (for the sake of mankind) that nobody in the world (especially the thin-skinned Iranians) takes this comicesque movie at face value.