Oh well, there’s this “Current Map of The Solar System” by the Armagh Observatory:

“The image below is an up to date map of the solar system displaying the orbits of the terrestrial planets and the estimated position of thousands of known asteroids. This diagram is missing comets, space probes and, of course, the undiscovered asteroids. Even conservative estimates would suggest that for every asteroid on a dangerous Earth-Approaching orbit there are hundreds more which have yet to be discovered. There are over 300 known objects on Earth-crossing orbits, the majority of which are potentially capable of causing death and destruction on a scale unheard of in human history.” 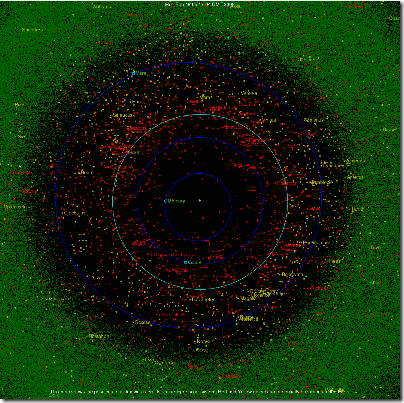 To make this clear: red and yellow = (possibly) EVIL! ZOMG!

“Small green points mark the location of asteroids which do not approach close to the Earth right now. This does not exclude the possibility that they will do so in the future but generally we can consider the Earth to be safe from these for the near future. Yellow objects (with the exception of the one in the middle which we astronomers call the Sun ;-) are Earth approaching asteroids which are called Amors after the first one discovered. Amors have orbits which come close to the Earth but they don’t cross the Earth’s orbit. However, their orbits are close enough to the Earth that they could potentially be perturbed by the influence of the planets and begin to cross the Earth’s orbit in a short time. There are over 300 known objects on such orbits.

Finally the red boxes mark the location of the Apollo and Aten asteroids. These cross the Earth’s orbit and are the most directly identifiable astronomical threat for the near future.”

Major Nelson announced this weeks Xbox Live Arcade game: N+. Because this game evolved from a former Flash game you can also get the “original version”:

“play as a ninja trapped in a world of well-meaning, inadvertantly homicidal robots. version 1.4 includes tons of levels (500), organized neatly into 100 unlockable episodes, and features 50 levels made by fans of N!” 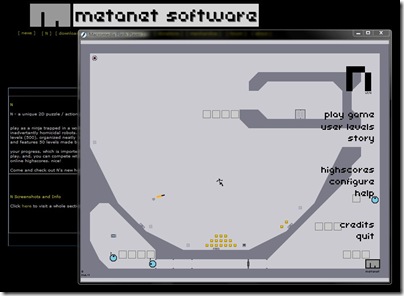