You do realise that, despite that fact no mass media is talking about it, there are still robots around and on Mars doing research for the last years? Yeah you’re right: Spirit and Opportunity are still well and alive on Mars. There were several other missions and this newly released 9.9 Tbytes of data (adds up to 16.8 Tbytes) is just fantastic stuff.

See an avalanche on Mars: 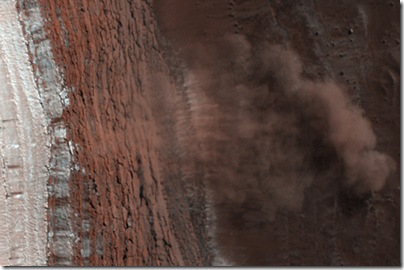 We have now released a total of 16.8 TB worth of data, or nearly 500,000 image products. Please check out the latest images on the HiRISE website on the “March 2008: New HiRISE Images Released to the Planetary Data System” page.”