“Probably you are thinking at the moment: “Why the heck should I use Windows Server 2008 as my Workstations Operating System?? Vista works fine for me…”.

The answer is clear: Windows Server 2008 has almost exactly the same features as Windows Vista (SP1), but is remarkably faster and more stable!“ 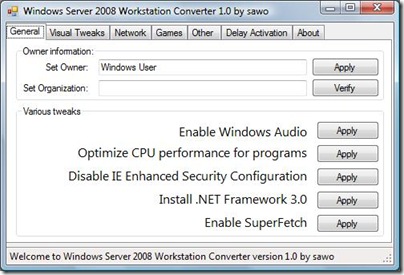 I cannot talk about the “more stable”-part since my Vista machines do not crash but if you’re one of those who just cannot live without the newest cutting-edge kernel version go ahead install Server 2008 and convert it into a useable workstation with Sound and stuff :-)