It seems that I missed that Augmented Reality Toolkit all the way until now. It’s ARToolKit and it’s completely OpenSource.

As a matter of fact there are a ton of demos available… HOW could I possibly miss that for so long?

“ARToolKit is a software library for building Augmented Reality (AR) applications. These are applications that involve the overlay of virtual imagery on the real world. For example, in the image to the right a three-dimensional virtual character appears standing on a real card. It can be seen by the user in the head set display they are wearing. When the user moves the card, the virtual character moves with it and appears attached to the real object.

One of the key difficulties in developing Augmented Reality applications is the problem of tracking the users viewpoint. In order to know from what viewpoint to draw the virtual imagery, the application needs to know where the user is looking in the real world.”

Here is a short video demonstration of what you could start with:

…not talking about the things that would be possible if someone had a great idea :-)

Small games that simulate real-world physics are just fantastic – I already wrote about a very similar game but this one has far more options :-) 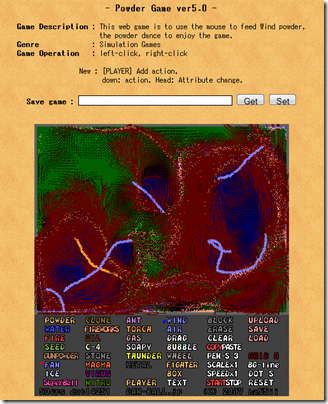 “This sandbox contains a variety of elements which the player can scatter at a mouse-click. Ice, water, fire, the titular “powder” (which serves as the sand). The heart of Powder Game is the way these elements interact. Water that touches ice will freeze. Ice that touches fire will melt. Drop a seed onto some powder and a plant will sprout. Water the plant and it will grow. Touch a flame to it and it will catch fire and burn.

The other key element that defines Powder Game is wind. Powder stacks in neat piles, but a click of the mouse (a right click by default, but this can be changed) sends it spiralling into the air. Currents coalesce, rub against each other, create eddies in the air. Fire creates wind, as does exploding gunpowder. Wind turns ice into snow, creates rivers of particles in the air. When the background effect is set to “BG-shade,” it becomes entrancing to watch.”

There is even a whole website around those physic games: 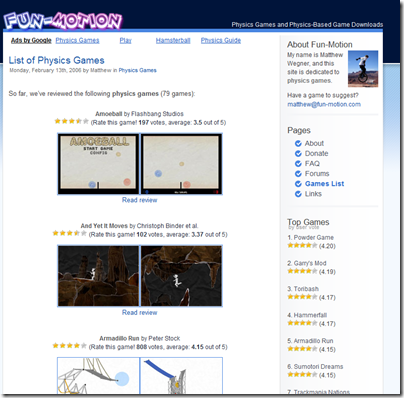 You may have heard about Levelhead – an augmented reality game made by Julian Oliver – if you did not hear about it? No problem:

“Augmented reality (AR) is a field of computer research which deals with the combination of real-world and computer-generated data. At present, most AR research is concerned with the use of live video imagery which is digitally processed and “augmented” by the addition of computer-generated graphics. Advanced research includes the use of motion-tracking data, fiducial marker recognition using machine vision, and the construction of controlled environments containing any number of sensors and actuators.”

So – Augmented reality mixes the reality and the computer graphics and creates a new reality for you. That’s a lot of theoretical…so let’s talk about Levelhead: 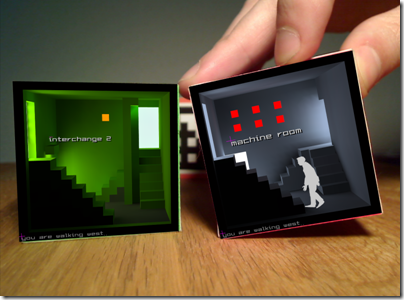 “levelHead uses a hand-held solid-plastic cube as its only interface. On-screen it appears each face of the cube contains a little room, each of which are logically connected by doors.
In one of these rooms is a character. By tilting the cube the player directs this character from room to room in an effort to find the exit.

Some doors lead nowhere and will send the character back to the room they started in, a trick designed to challenge the player’s spatial memory. Which doors belong to which rooms?

There are three cubes (levels) in total, each of which are connected by a single door. Players have the goal of moving the character from room to room, cube to cube in an attempt to find the final exit door of all three cubes. If this door is found the character will appear to leave the cube, walk across the table surface and vanish.. The game then begins again.
Someone once said levelHead may have something to do with a story from Borges.. For a description of the conceptual basis of this project, see below. “

If you are not amazed now? You should watch this:

The thing is – this cool game and technology will be available at the end of this month as full open-source. I suggest to check Julians site back at the end of the month at last.

It’s really a piece of art with only 256 pixels space – it’s the remake of the Defender game you won’t be able to play in Full HD:

“DEFENDER of the favicon is a JavaScript remake of Eugene Jarvis‘ brilliant arcade game Defender written by Mathieu ‘p01’ Henri and inspired by Scott Schiller‘s experiment with generated favicons VU meter. The idea was to push the concept of generated favicons further and pack a thrilling retro shooter in 16×16 pixels using JavaScript, canvas and data: URIs.”

“Each frame of the game is generated on the fly in JavaScript into a 16×16 canvas element, then converted to a 32bits PNG image and used in place of the favicon.”

To be clear: This is not a joke – it’s an actual game… the size of:

“I am pleased to announce that Mono C# compiler (gmcs) has now full C# 3.0 support. Most of the features has been available since Mono 1.2.6 release. However, with the upcoming Mono 2.0 release we will also support complex LINQ expressions and mainly expression trees which is fairly overlooked new feature with a lot of potential.”