I used trueSpace years ago when a demo version appeared on one of those CDs that often came with computer magazines… it must be more than 10 years now. I was pleased to read about the availability of the current version of trueSpace as a completely free tool:

“trueSpace7.6 is a fully-featured 3D authoring package that will let you model, texture, light, animate and render 3D content. As well as traditional images and movies, you can also make 3D content for online shared spaces, and for Virtual Earth.” 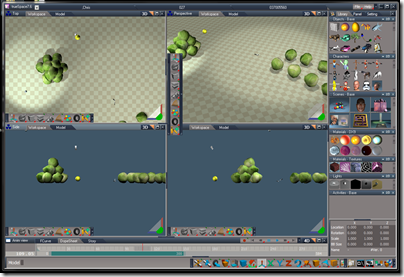 When I thought of self replicating machines I thought of end-of-time scenarios and a robot armies conquering the world and enslaving the human race… it’s not that bad right now but we’re getting to it… sort of :-)

“Adrian Bowyer (left) and Vik Olliver (right) with a parent RepRap machine, made on a conventional rapid prototyper, and the first complete working child RepRap machine, made by the RepRap on the left. The child machine made its first successful grandchild part at 14:00 hours UTC on 29 May 2008 at Bath University in the UK, a few minutes after it was assembled.”

“RepRap is short for Replicating Rapid-prototyper. It is the practical self-copying 3D printer shown on the right – a self-replicating machine. This 3D printer builds the parts up in layers of plastic. This technology already exists, but the cheapest commercial machine would cost you about €30,000. And it isn’t even designed so that it can make itself. So what the RepRap team are doing is to develop and to give away the designs for a much cheaper machine with the novel capability of being able to self-copy (material costs are about €500). That way it’s accessible to small communities in the developing world as well as individuals in the developed world. Following the principles of the Free Software Movement we are distributing the RepRap machine at no cost to everyone under the GNU General Public Licence. So, if you have a RepRap machine, you can make another and give it to a friend… “