If you’re using Windows and if you want to access those filesystems that are used by Linux you can use FUSE on Windows now.

“Filesystem in Userspace (FUSE) is a loadable kernel module for Unix-like computer operating systems, that allows non-privileged users to create their own file systems without editing the kernel code. This is achieved by running the file system code in user space, while the FUSE module only provides a “bridge” to the actual kernel interfaces. FUSE was officially merged into the mainstream Linux kernel tree in kernel version 2.6.14.

FUSE is particularly useful for writing virtual file systems. Unlike traditional filesystems, which essentially save data to and retrieve data from disk, virtual filesystems do not actually store data themselves. They act as a view or translation of an existing filesystem or storage device. In principle, any resource available to FUSE implementation can be exported as a file system. See Examples for some of the possible applications.” (Wikipedia)

There is a version of FUSE for Mac and of course for linux and now with coLinux there’s a chance to get the FUSE world onto the Windows machines.

“For our task we will use coLinux. coLinux is a modified linux kernel that can be executed as an application or a service in the Windows environment. The web page of the project is http://www.colinux.org/.” 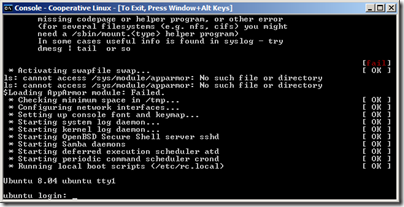