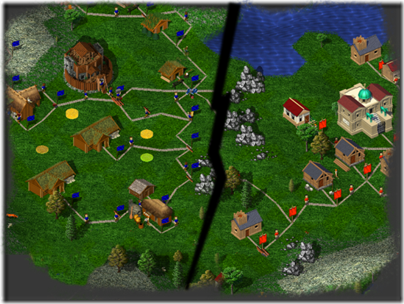 From the wiki about section:

“In Widelands, you are the regent of a small tribe. You start out with nothing but your headquarters, a kind of castle in which all your resources are stored. In the course of the game, you will build an ever growing settlement. Every member of your tribe will do his or her part to produce more resources – wood, food, iron, gold and more – to further this growth. But you are not alone in the world, and you will meet other tribes sooner or later. Some of them may be friendly and trade with you. However, if you want to rule the world, you will have to train soldiers and fight.

Widelands offers a unique style of play. For example, a system of roads plays the central role of your economy: all the goods that are harvested and processed by the tribe must be transported from one building to the next. This is done by carriers, and those carriers always walk along the roads. It is your job to lay out the roads as efficiently as possible.

Another refreshing aspect of the game is the way you command your tribe. There is no need to tell every single one of your subjects what to do – that would be impossible, because there can be thousands of them! Instead, all you’ve got to do is order them to build a building somewhere, and the builders will come. Similarly, whenever you want to attack an enemy, just place an order to attack one of their barracks, and your soldiers will march to fight. You’re really a ruler: You delegate in times of war and in times of peace!

Widelands offers single-player mode with different campaigns; the campaigns all tell storys of tribes or Empires and their struggle in the Widelands universe! However, settling really starts when you unite with friends over the Internet or LAN to build up new empires together – or to crush each other in the dusts of war. Widelands also offers an Artifical Intelligence to challenge you.

In the end, Widelands will be extensible, so that you can create your own type of tribe with their own sets of buildings. You can create new worlds to play in, and you could even create new types of worlds (who says you can’t build a settlement on the moon?). ”