this time a XPS M1330 blue-screened and only shows colored lines if you restart it: 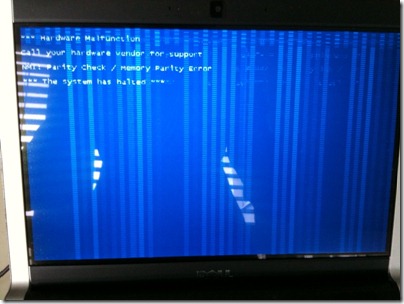 If only the hardware would be as great as their service is!

It’s also suitable for anyone who wants to develop iPhone Applications.

“I started investigating how I might wire up — and then write native iPhone apps from — a scripting language. Lua was on my radar already. It’s compact, expressive, fast enough, and was designed to be embedded. Took only about 20 minutes to get the Lua interpreter running on the iPhone. The real work was to bridge Lua and all the Objective-C/CocoaTouch classes. The bridge had to work in two directions: it would need to be able to create CocoaTouch objects and also be able to respond to callbacks as part of the familiar delegate/protocol model.”

There’s a great Visual Studio documentary on CH9. Highly recommended to anyone who wants to see what happened from the start till now.

“Welcome to the first installment of the Visual Studio Documentary.This is an hour long documentary that is split into two parts, roughly a half hour each. Welcome to part one, where we take you back to the days of MS-DOS and Alan Cooper who originally sold Visual Basic to Bill Gates back in 1988.  Next week we will feature Part Two but for those that would like to watch it sooner, here is Part Two. In addition, each week we will post a longer and more in-depth stand alone interview from the interviewees that were featured in the documentary.”