Setting Orange 5 Chaos: The Apostle Hung Mung’s Holyday. Sage of Ancient China, and Official Discordian Missionary to the Heathens. He who originally devised the Sacred Chao, which was promptly ripped off by the Taoists. Patron to Discordians who enjoy television static.

The 73rd and Last Day of the Season of The Aftermath. Eye Day is celebrated by playing Discordian Games.

A Whollyday also known as Santa Claus Day occurring on 67 Aftermath aka 25 December.

Do the money dance, waving money in fans whilst blasting Money by Pink Floyd. Identify a ridiculously worthless toy and encourage all small children to want one. Select greyfaces to receive a particular theme gift (like banana-flavored edible underwear) from thousands.

Boomtime 40 Aftermath: Remembering the Life and Work of Lord Omar Khayyam Ravenhurst, who left us on this day in 3164 YOLD (1998 AD).

Boomtime 5 Aftermath: The Apostle Malaclypse the Elder’s Holyday. A wandering Wiseman of Ancient Mediterrania (“Med-Terra” or middle earth), who followed a 5-pointed Star through the alleys of Rome, Damascus, Baghdad, Jerusalem, Mecca and Cairo, bearing a sign that seemed to read “DOOM”. (This is a misunderstanding. The sign actually read “DUMB”.)

The 73rd and Last Day of the Season of Bureaucracy. Eye Day is celebrated by playing Discordian Games.

Setting Orange 66 Bureaucracy: A Discordian Holy Day of Fondle and Gropage, when all Discordians should grab their Legislative Representatives by the goolies and cry out “Where’s my Bill of Rights, you bastard?!”

“Fraud and corruption prevent a fair and proper expression of the public voice; that open violation of the laws are constantly occurring, caused by mobs, parties, factions and undue influence of political sects; that the citizen has not that protection of person and property which he is entitled.”

The 27th Day of the Season of Bureaucracy: The Day of the Sloth, Holy Day of Slothage. Kick back. Hang around. Grow Moss.

Prickle-Prickle 5 Bureaucracy: The Apostle Zarathud’s Holyday. A hard nosed Hermit of Medieval Europe and Chaosphe Bible Banger (after his enlightenment, that is). Dubbed “Offender of The Faith”. Discovered the Five Commandments (The Pentabarf).

Expose your undies! Celebrate by wearing nothing but unmentionables in public, or at least by wearing your underwear, or somebody else’s, where people can see it so they can gawk at you. (This is a great day to apply for membership in the Lesser Disorder of Underwear Heads.)

The 73rd and Last Day of the Season of Confusion. Eye Day is celebrated by playing Discordian Games.

Sweetmorn 55 Confusion: Remembering the Life and Words of Malaclypse the Younger, who left us on this day in 3166 YOLD (2000 AD).

Speak to everyone by pronouncing the words as if they were spelled backwards. .gnihtyna egnahc dluow ti taht toN

The 27th Day of the Season of Confusion: The Day of the Sloth, Holy Day of Slothage. Kick back. Hang around. Grow Moss.

Recognize and credit your imaginary friend, whom you blame for everything on all the other days of the year. Or help someone anonymously, but in a way they’d never expect. (“Captain Tuttle” was the made-up buddy of Benjamin Franklin “Hawkeye” Pierce and “Trapper John” McIntire on the TV show M*A*S*H. They used the mythical captain’s identity to get supplies and funds from the U. S. Military which were then sent to help an orphanage).

Pungenday 70 Discord, 2784 YOLD (May 23, 1618 AD) Prague: a few royal officials were thrown out a window of Hradcany Castle by some noblemen, but survived the fall by landing in a cart full of manure. The date for this event falls on an extremely Illuminated day of the Gregorian Calendar, 5/23.

Sweetmorn 68 Discord: Celebrating the Birth of Malaclypse the Younger on this day in 3107 YOLD (1941 AD).

Discoflux is the holyday of of the season of Discord. It is celebrated on Discord 50 (Discordian calendar) or May 3 (Gregorian calendar).

The Principia Discordia doesn’t indicate what to do, but do something that promotes Discord, or maybe Disco.

Commemorating the Ordination of the Universe by passing out as many Authorized and Authentic All-Purpose Discordian Society Ordination Certificates as possible.

Upon completing 52 years and 11 days of studying the universe, Omar Khayyam Ravenhurst (under his alias of Kerry Wendell Thornley) became an ordained Minister of the Universal Life Church — on Sweetmorn 43 Discord, 3156 (April 26th 1990).

A subtle Buddhist teaching that nobody without the Buddha Mind understands is that when the Buddha was enlightened, the whole universe — with all its sentient beings, inanimate objects and blunt instruments — attained Satori with him.

On April 26th of 1990 the entire cosmos — people, stars, space rubbish and all — became an ordained minister and so anyone or anything is now legally qualified in most states to get drunk at weddings and giggle at funerals, spit holy water, christen puppies and preach salvation by fire and brimstone.

Only an ordained minister, however, can see how this is possible.

So, on Universal Ordination Day we commemorate the Ordination of the Universe by passing out as many Authorized and Authentic All-Purpose Discordian Society Ordination Certificates as possible.

“Every Man, Woman and Child is a Pope!”

…Code.org CEO Hadi Partovi noted in late 2016 that he was “still working on Pope Francis.” GeekWire reports that Partovi was able to cross that one off his bucket list Thursday, as he helped Pope Francis become ‘the first Pope to write a line of code’ at a ‘Programming for Peace’ event…

At first I was confused which pope could it be that has not written any code before. But I quickly realized that the news is about the 266th pope of the catholic church.

Of course a lot more popes already had coded before him. Evidently a lot earlier. And to complete the circle, make yourself comfortable: In discordianism you are a pope!

Don’t delay, order today! It’s in store since, actually right now. You won’t even find it through search yet!

Who wants a freebie? Comment and you’ll be given.

I’ve finished my little coding exercise today. With a good sunday afternoon used to understand and develop an iOS and Watch application from scratch I just handed it in for Apple AppStore approval.

The main purpose, aside from the obvious “learning how it’s done”, is that I actually needed a couple of complications on my watch that would show me the current day/date in the discordian calendar.

I have to say that the overall process of developing iOS and Watch applications is very streamlined. Much much easier than Android development.

The WatchKit development was probably the lesser great experience in this project. There simply is not a lot of code / documentation and examples for WatchKit yet. And most of them are in Swift – which I have not adapted yet. I keep to Objective-C for now still. With Swift at version 5 and lots of upgrades I would have done in the last years just to keep up with the language development… I guess with my choice to stick to Objective-C I’ve avoided a lot of work.

Anyhow! As soon as the app is through AppStore approval I will write again. Maybe somebody actually wants to use it also? :-)

With writing the app I just came up with the next idea for a complication I just really really would need.

In a nutshell: A complication that I can configure to track a certain calendar. And it will show the time in days/hours/minutes until the next appointment in that specific calendar. I will have it set up to show “how many hours till wakeing up”.

I’ve started to write a watch app for iOS/WatchOS which is going to display the current calendar information according to the discordian calendar.

Since there’s no watch support on any of the calendar apps in the AppStore and I wanted to have easy to use watchface support I had to try it myself.

I will update here on the progress but so far it looks like this:

In less than 10 days the season of chaos will end and discord will take over.

To be prepared and to not miss any important days – as some sort of public service announcement – I hereby link you to the discordian calendars adjusted for the current year 3185 (2019).

allow me to explain by quoting wikipedia:

Dicordianism is a paradigm based upon the book Principia Discordia, written by Greg Hill with Kerry Wendell Thornley in 1963, the two working under the pseudonyms Malaclypse the Younger and Omar Khayyam Ravenhurst.

Due to these principles, a Discordian believes there is no distinction between disorder and chaos, since the only difference between the two is that one refers to ‘order’.

This is likely a major reason for the inconsistency in the wording. An argument presented by the text is that it is only by rejecting these principles that you can truly perceive reality as it is, chaos.

And given that information you can expect a discordian calendar to exist. This calendar defines years (YOLD = year of our lady of discord) and seasons and days. And holydays:

Chaosflux is a Holyday of the season of Chaos. It is celebrated on Chaos 50 (Discordian calendar) or February 19 (Gregorian calendar).

Very little is known about this holyday. What we do know is pretty much made up as we go along.

So now back to the holyday itself. How would you celebrate such a distinguished day?

I will use the services of theuselessweb.com to click 5 times on their most interesting button and then meditate on what comes up: 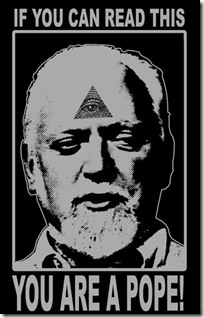 I was in desperate need for an DDate equivalent running on Windows. DDate is an unix implementaion of date accoridng to the erisian calendar described in the principia discordia.

I only found some C Implementations. And since it’s fun to do I ported the original Discordian Date C code to C#.

This page can be accesses here. You can call another page with parameters and you only will get the ddate output back: