Great stuff ahead – this is just the thing I would want to write if it’s not been written already. This tool is free and open source and it’s the perfect workaround for those usual cases when you want to download a podcast in your holiday and your apple branded device tells you “You can only download files up to 10 Megabyte over 3G connections” – You take your notebook, log into 3G, create a WiFi Hotspot with this tool and off you go.

“Over the last week some of you may have heard about Connectify. It’s an app that unleashes the “Virtual WiFi” and Wireless Hosted Network features of Windows 7 to turn a PC into a Wireless Access Point or Hot Spot. Well, I looked into what it would take to build such an app, and it really wasn’t that difficult since Windows 7 has all the API’s built in to do it. After some time of looking things up and referencing the “Wireless Hosted Network” C++ sample within the WIndows 7 SDK, I now have a nice working version of the application to release. I’m calling this project “Virtual Router” since it essentially allows you to host a software based wireless router from your laptop or other PC with a Wifi card. Oh, and did I mention that this is FREE and OPEN SOURCE!” 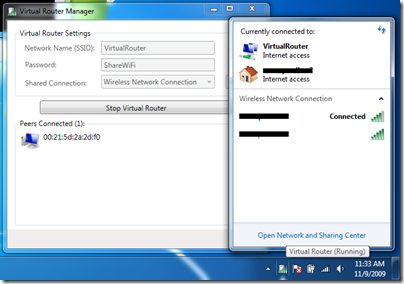 “The Wireless Network create/shared with Virtual Router uses WPA2 Encryption, and there is not way to turn off that encryption. This is actually a feature of the Wireless Hosted Network API’s built into Windows 7 and 2008 R2 to ensure the best security possible.
You can give your "virtual" wireless network any name you want, and also set the password to anything. Just make sure the password is at least 8 characters.”