Progress is showing in regards of the next incarnation of the famous Hypertext transport protocol aka http. Despite the fact that those 4 letters got banned from modern browser adress bars it’s still the cornerstone of everything your browser does with the network. 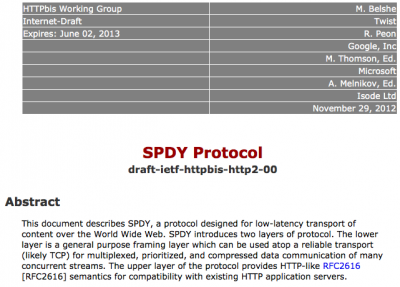 Based upon the work of Google and their SPDY implementation it comes with a lot of things that come in handy when thinking about modern demands for security, performance and multi-channel-data-transport.

In November 1998 there was a book released about file system design taking the Be File System as the central example.

“This is the new guide to the design and implementation of file systems in general, and the Be File System (BFS) in particular. This book covers all topics related to file systems, going into considerable depth where traditional operating systems books often stop. Advanced topics are covered in detail such as journaling, attributes, indexing and query processing. Built from scratch as a modern 64 bit, journaled file system, BFS is the primary file system for the Be Operating System (BeOS), which was designed for high performance multimedia applications.

You do not have to be a kernel architect or file system engineer to use Practical File System Design. Neither do you have to be a BeOS developer or user. Only basic knowledge of C is required. If you have ever wondered about how file systems work, how to implement one, or want to learn more about the Be File System, this book is all you will need.” 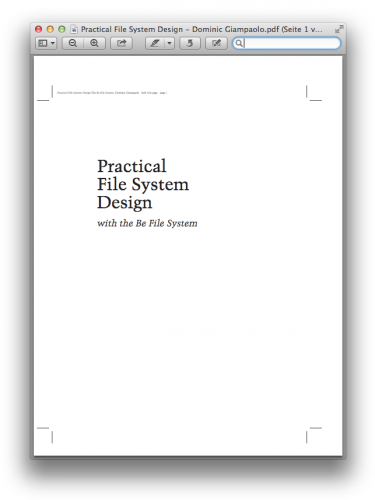 If you’re interested in the matter I definitely recommend reading it – it’s available for free in PDF format and will help to understand what those file system patterns are all about – even in terms of things we still haven’t gotten from our ‘modern filesystems’ today.

History was one of my favourite classes at school – I liked it so much that I even wrote one of my final examinations at the A levels in history. I like to know how stuff happened and I like to know what people got from it.

Being a german there’s a lot of history in the last 100 years guiding the interest. You can imagine that the darkest parts of those 100 years are the first and the second world war. Thankfully my generation never had to suffer through such a terrifiying time. 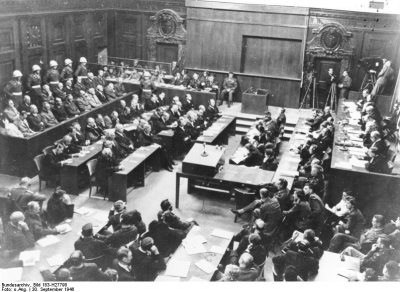 So for the equally interested reader of this article I have good news. In times of the internet we get access to documents that were previously hard or expensive (or both) to get. Like the original documents of the so called Nuremberg Trial – the Trial of the Major War Criminals before the International Military Tribunal in Nuremberg.

You can get them in english, over 16.000 pages of PDFs, packed into 42 PDF files. Or in the official translation in German on Zeno.org. 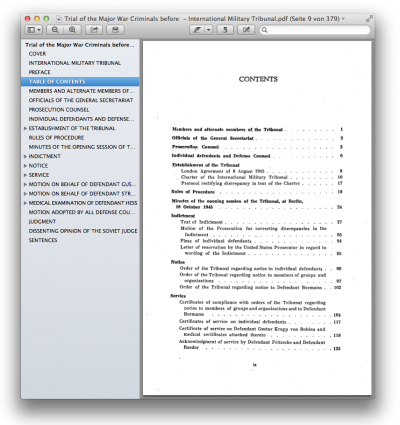 That will keep me reading for a while – but there’s even more. With the progression of scan projects more and more original sources are becoming available for everyone.

It’s been some weeks since I wrote a status update on the ELV MAX! cube protocol reverse engineering and integration into my own home automation project called h.a.c.s..

So first of all I want to give a short overview over what has been achieved so far:

I started the reverse engineering with just one shutter contact and one thermostat. After all my test were successful I went for the big package and ordered some more sensors. This is how the setup is currently configured:

I’ve learned a lot of interesting things about the ELV MAX! cube hardware and software. One is that you need to be ready for surprised. The documentation of the cube tells you the following:

Did you spot the funny fact? 50 devices – we’re well below that limit. 10 rooms – holy big mansion batman! We’re well over that. How is that possible? Well take it as a fact – you can create more than 10 rooms. And that is very handy. I’ve created 13 rooms and there are probably more to come because those shutter contacts are quite cheap and can be used for various other home automation sensory games. The tool to set-up and pair those sensors just came up with a notice that said “Oh well, you want to create more than 10 rooms? If you’re sure that you want that we allow you to, but hey, don’t blame us!”. Cool move ELV! – As of now I haven’t found any downside of having more than 10 rooms.

All my efforts started with firmware version 1.3.5. This firmware seemed to have some severe memory leaks – because just by retrieving the current configuration information every 10 seconds the device would stop communicating after more then 48 hours. Only a reboot could revive it – sometimes amnesia set in which led to a house roundtrip for me.

With some changes in the library (like keeping the connection open as long as possible) and a new firmware version 1.3.6. the cube was way more cooperative and hasn’t crashed for about 1 month now (with 10 seconds update times).

So what does my library do? It is designed to run in it’s own thread. When it’s started it opens a connection to the cube and retrieves the current status and configuration information. Those informations are stored in an object called “House”. This house consists of multiple rooms – and those rooms are filled with window shutter contacts and thermostats. All information related to those different intances are stored along with them. The integration into h.a.c.s. allows the library to generate sensor and actor events (like when a temperature changes, a window opens/closes) which are passed back to h.a.c.s. and handled in the big event loop there. 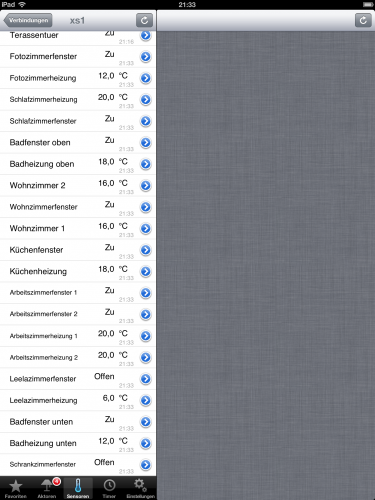 After the successful integration of the ELV MAX! cube I’ve started to work on the next bit of networking home automation equipment in my house – a solar panel data logger called “Solar-Log 500”. This device monitors two solar power inverters and stores the sensory data.

“Funny” story first: this device has the same problem like the ELV MAX! cube. When you start to poll it every 10 seconds (or less) it just stops operating after about 20 hours. Bear in mind: In case of the Solar-Log I just http-get a page that looks like this in the browser: 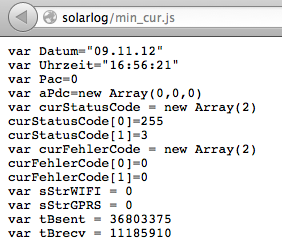 And by doing so every 10 seconds the device stops working. I am using the current firmware – so one workaround for that issue is to planable reboot the Solar-Log at a time when there is no sun and therefore nothing to log or monitor.

Beside that it’s a fairly easy process: Get that information, log it. Done.

So there you have it – h.a.c.s. interfacing with three different devices and roughly 100 sensors and actors over 434mhz/868mhz, wireless and wired network. There’s still more to come!

A lot of people seem to dive into home automation these days. Apparently Andreas is also at the point of starting his own home automation project. Good to know that he also is using the EzControl XS1 and in the future maybe even the ELV MAX! cube. Party on Andreas!

This October I had the pleasure to fly to Tokyo for the second time in 2012.

The development unit of Rakuten Japan was hosting the 7th Rakuten Technology Conference in Rakuten Tower 1 in Tokyo.

The schedule was packed with up to 6 tracks in parallel. From research to grass-roots-development a lot of interesting topics.