Those who know me well know that I am a strong believer of artificial intelligence. We’re not there yet. Not even close, I don’t know if we (as in humanity) even left the launchpad. But I strongly believe that it will be possible to simulate human thoughts – maybe not in the way AI is defined:

“The field was founded on the claim that a central property of humans, intelligence—the sapience of Homo sapiens—can be so precisely described that it can be simulated by a machine.This raises philosophical issues about the nature of the mind and the ethics of creating artificial beings, issues which have been addressed by myth, fiction and philosophy since antiquity.Artificial intelligence has been the subject of optimism,but has also suffered setbacksand, today, has become an essential part of the technology industry, providing the heavy lifting for many of the most difficult problems in computer science.” (Wikipedia)

More on that in another article in the future since I started working on that subject earlier and now I come across a lot of authors and mostly science fiction books that deal with that topic.

Now there is a new book by Ray Kurzweil. It’s called “How To Create A Mind” and deals with the topic of how human thoughts come to be and how the human mind seems to work. 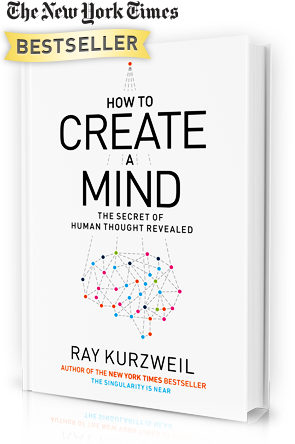 “Now, in his much-anticipated How to Create a Mind, he takes this exploration to the next step:  reverse-engineering the brain to understand precisely how it works, then applying that knowledge to create vastly intelligent machines.

Drawing on the most recent neuroscience research, his own research and inventions in artificial intelligence, and compelling thought experiments, he describes his new theory of how the neocortex (the thinking part of the brain) works: as a self-organizing hierarchical system of pattern recognizers. Kurzweil shows how these insights will enable us to greatly extend the powers of our own mind and provides a roadmap for the creation of superintelligence—humankind’s most exciting next venture. We are now at the dawn of an era of radical possibilities in which merging with our technology will enable us to effectively address the world’s grand challenges.”