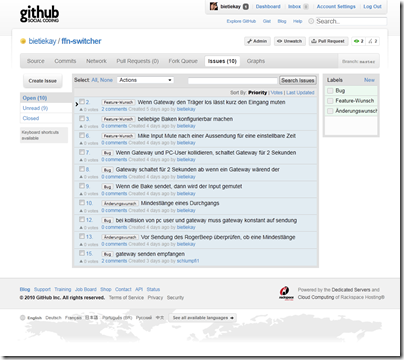 After 5 years of TechEd abstinence it’s time to visit the conference again. This years TechEd will be held in Berlin which is quite nice since traveling will be reduced to a minimum. Since the session schedule is already available I’ve already filled my calendar for TechEd week. 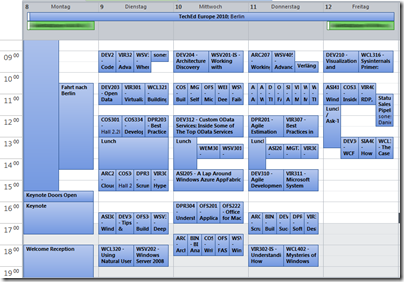 Okay it’s impressive to see that so many interesting sessions can be held in one week’ – the bad thing is that I need do decide which to go and which to watch on video later.

On later notice: Since I will be there it would be a great opportunity to meet. Let me know if you are there and want to meet.

Hurray! Finally the 2.8 version of Mono – the platform independent open source .NET framework is available as of today. I finally don’t have to recompile the trunk every now and then to get my bits running

The Major Highlights according to the release notes are:

Oh – they even linked my benchmark article.

In the last 10+ years I was fiddling with different home automation concepts. Mostly without broad use cases because at that time no one seemed to be interested in having sensors and actors like crazy at home. In fact not that many people seem to care these days.

Having more and more hardware and software around us creates the use cases for a broader audience people like me have for 10+ years. Mainstream is a bitch for nerds

That said I found a nice plastic box I want to use in a winter project. This plastic box is called “EzControl XS1”. It comes with several visible and “invisible” interfaces.

The visible and obvious ones are: power, 100 mbit ethernet, sd card slot. So it takes some power and does something on the network. The not so obvious and therefore “invisible” interfaces are the most interesting ones: the EzControl XS1 comes with the ability to send and receive on 433 Mhz and 868 Mhz.

Yes that are the ranges used by switchable and dimable power sockets, temperature sensor and AMR. The EzControl XS1 is not that cheap (coming at 189 Euros for the base version and additional 65 Euros per upgrade option). I do not own one yet so it’s the plan to acquire at least one and start of with dimable power sockets and add more sensors and actors on the way

One great feature of the EzControl XS1 is the embedded WebServer with which the users application (the one I want to write) can interact using a HTTP/JSON Protocol. Oh dear: Sensor data and Actor control using JSON. How great is that!

There is some example code available (even a proprietary iPad/iPhone client) but since I want to have some custom features I do not currently see to be available in software I am going to write a set of tools which will get and protocol sensor data and run scripts to controls actors. Oh it’ll be all available as open source (license not yet chosen).

P.S.: If some one from Rose+Herleth is reading this and wants to help – send me a test unit

After the last Open Movie Project “Bug Buck Bunny” – Sintel is the next short movie available for free download. Get it here.

“Sintel” is an independently produced short film, initiated by the Blender Foundation as a means to further improve and validate the free/open source 3D creation suite Blender. With initial funding provided by 1000s of donations via the internet community, it has again proven to be a viable development model for both open 3D technology as for independent animation film.
This 15 minute film has been realized in the studio of the Amsterdam Blender Institute, by an international team of artists and developers. In addition to that, several crucial technical and creative targets have been realized online, by developers and artists and teams all over the world.

“Sintel” commenced in May 2009, with producer Ton Roosendaal establishing a core team consisting of Colin Levy (director), David Revoy (concept art), Martin Lodewijk (story) and Jan Morgenstern (composer). In August script writer Esther Wouda was approached as a consultant, which resulted in her taking the responsibility for the entire screenplay. Esther then worked in close cooperation with Colin, David and Ton to deliver the final script early November. Meanwhile, Colin and David realized the first storyboards.

Based on a public call for artists – with over 150 respondents – the Durian artist team got established in July 2009. They first met in a pre-production week in Amsterdam in August, and all decided to join the project per October 1st. With the final movie budget still unknown, the target then still was to finish the film within 7 months, with a team of 6 artists and 2 developers. At that time the team still had the hopes to be able to realize the script in a 6-8 minute film.

In november, the Netherlands Film Fund approved on a substantial subsidy for Sintel, enough to extend the project to 10 months, with possible 1 or 2 extra artist seats in the final months. It was also by this time that breakdowns and animatic edits showed that the script had to be revised to become more compact, with a story structure using a flashback.

In the months after, Colin’s work on the Director’s Layout – 3D animatic shots – and final designs on the grand finale gradually made the movie longer, from 9 minutes in november, to almost 12 in May. Proper story telling, to absorb an audience with convincing characters and action just takes time!

With the highly anticipated extra funding from the Amsterdam Cinegrid – also funding a 4k resolution version – Ton finally could extend the team with 5 artists and a developer in March 2010. With 14 people the film then was completed for a first screening on July 18th in cinema Studio K in Amsterdam.
Three artists then stayed in Amsterdam working on final shot edits, lighting design, compositing, and on the impressive 2 minute film credits. The movie ended up with a total duration of 14m:48s, 888 seconds! 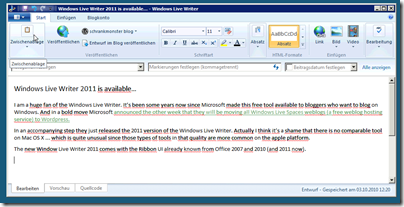 “Software projects are displayed by Gource as an animated tree with the root directory of the project at its centre. Directories appear as branches with files as leaves. Developers can be seen working on the tree at the times they contributed to the project.

Currently there is first party support for Git, Mercurial and Bazaar, and third party (using additional steps) for CVS and SVN. “