Since I am back at developing the Head-Up-Display app I was writing about in February (yeah, mornings got darker again!) I want to leave this nice looking Odometer Javascript library here:

Odometer is a Javascript and CSS library for smoothly transitioning numbers. See the demo page for some examples.

If there is any discussion or argument about electric mobility these days the topic of range and battery-aging is coming up rather quick.

But what is it then, how does a battery in an electric car age over time and mileage? Given that car manufacturers seem to settle on a ca. 150.000km total-driven-miles baseline for giving a battery-capacity percentage guarantee. Something like…

The future owners of ID. models won’t need to worry about the durability of their batteries either, as Volkswagen will guarantee that the batteries will retain at least 70 per cent of their usable capacity even after eight years or 160,000 kilometres.

Model S and Model X – 8 years (with the exception of the original 60 kWh battery manufactured before 2015, which is covered for a period of 8 years or 125,000 miles, whichever comes first).

Model 3 with Long-Range Battery – 8 years or 120,000 miles, whichever comes first, with minimum 70% retention of Battery capacity over the warranty period.

So. Guarantees are one thing. Reality another. There’s an interesting user-driven survey set-up where Tesla owners can hand in their cars data thus participate in the survey.

And it yields results (getting updated as you read…):

Good news that is! Given that the average household will do about or less than 20.000 km/year it would mean over 12 years of use and the car still would hold 90% of battery charge. The battery being the most expensive single component on an electric car this is extremely good news as it’s unlikely that the battery will be the reason for the car to be scraped after this mileage.

When you are travelling Japan you will observe very interesting things while using public transport. In a train or a bus the driver is likely to talk and seemingly magically point with his finger and wave his hand.

You will very likely observe a behavior that might not make sense at first but is fascinating to see. And all is to ensure the safety of the vehicle and all it’s passengers.

Pointing and calling is a method in occupational safety for avoiding mistakes by pointing at important indicators and calling out the status. It is common in Japan and railways of China. It is sometimes referred to by its Japanese terms, shisa kanko (指差喚呼), shisa kakunin kanko (指差確認喚呼) or yubisashi koshō (指差呼称).

Making large gestures and speaking out the status helps keeping focus and attention. The method was first used by train drivers and is now commonly used in Japanese industry.

It is recommended by the Japan Industrial Safety and Health Association (JISHA, 中央労働災害防止協会)

.
Pointing and calling requires co-action and co-reaction among the operator’s brain, eyes, hands, mouth, and ears.

We are currently visiting Tokyo and car traffic seems not to be the most pressing issue. When you encounter bike parking lots like this one you know why. It also can be done in your city. The streets in the city are owned by pedestrians not cars.

Many cars these days come with head up displays. These kind of displays are used to make information like the current speed appear “floating” over the street ahead right in your field of vision.

This has the clear advantage that the driver can stay focused on the street rather than looking away from the street and to the speedometer.

As practical as it seems these displays are not easy to build and seemingly not easy to design. Every time I came across one it’s built-in functionalities where limited in a way that I only can assume not a lot of thought had gone into what exactly would the driver like to see and how that would be displayed. There was always so much left to desire.

Apparently the technology behind these HUDs is at a point where it’s quite affordable to start playing with some ideas to retrofit a car with a more personal and likeable version.

So I started to take a look at what is available – smart phones have bright displays and I had never tried to see what happens when you try to utilize them to project information into the windshield. So I tried.

As you can see – bright enough, readable but hazy and not perfectly sharp. The reason is quite simple:

“In the special windshield normally used, the transparent plastic safety material sandwiched in between the two pieces of glass must have a slight and very precise wedge, so that the vehicle operator does not see a HUD double image.”

There are some retrofit adhesive film solutions available that claim to help with that. I have not tried any yet. To be honest: to my eye the difference is noticeable but not a deal-breaker.

So I’ve tried apps available. They work. But they do a lot of things different from how I would have expected or done them. They are bearable, but I think it could be done better.

tldr: I started prototyping away and made a list of things that need to be done about the existing HUD applications.

Here’s my list of what I want to achieve:

Navigation is of limited value as the only way I could think of adding value would be a serious AR solution that uses the whole windshield. Now I’ve got these small low-power projectors around… that get’s me thinking…

What would you want to have in such a HUD in your car?

As racing cars with petrol engines gets more and more uninteresting for the masses and even Formula 1 faces competition by Formula E.

Now having humans inside cars racing a wide track is one thing, but using relatively cheap but extremely high-tech multi-copters with first-person-view cameras mounted on them and flown by crazy guys sitting next to the “racing track” is the next big thing!

As you can see it basically looks like the Endor-scenes from Star Wars. In fact it does look so interesting that I am tempted to try it myself…

After a very very long wait finally Forza 3 arrived! The first panoramic view of a 1-series BMW in Forza 3:

Finally a game where I can drive that car!

Mission accomplished. I successfully talked a co-worker, who needed to buy a new car, into buying a gadget-packed BMW 1 series.

He calls it his “cluster on 4 wheels” – because obviously there is some processing “horse-power” in this machine :-) 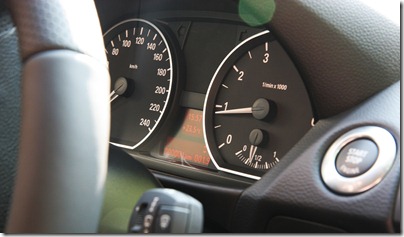 May he always have a safe ride!

Uhh what a day! We had the opportunity to test drive a brand new BMW Z4 sDrive23i. This straight-6 engine is just phenomenal. Even this smallest 204 hp version feels and sounds like a roadster should sound and feel.

We almost emptied a complete fuel tank on about than 350 km of road today – which means we had that much fun. Maybe when we buy one in the future it should have a bit more horsepower.

We even made some pictures: 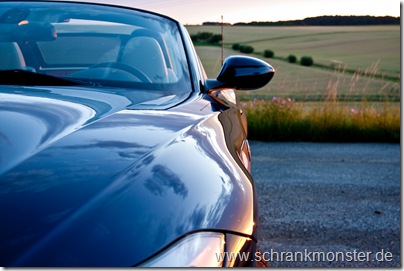 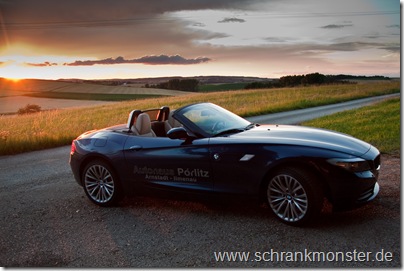 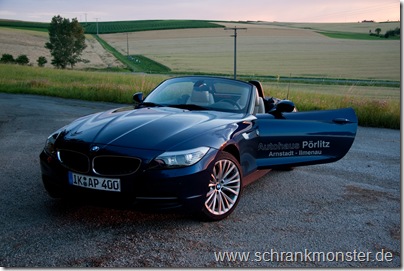 thanks to our dealership: BMW Autohaus Poerlitz